When Japanese tableware are used?

Osechi ryōri – originally a term used in reference to foods prepared for Sechinichi or Sekku(seasonal festivals). Especially food served during the New Year’s Holidays in Japan
Honzen ryōri – extremely high-grade Japanese meal served all at once on a table with legs. It consist of some dishes of food; Honzen (the first tray), Ninozen (the second tray), and Sannozen (the third tray)
Shojin ryōri – Japanese Buddhist cuisine – vegetarian cuisine introduced from China
Kaiseki ryōri – simple meal served before a ceremonial tea; tea-ceremony dishes
Kaiseki ryōri – set of dishes served on an individual tray for entertaining guests; banquet

Japanese cuisine is often express as “Subtraction Cooking” a simple cooking that brings out the natural flavors of food, without adding too much arrange to ingredients, extract sweetness by salt, use of Dashi (soup stock), removal of astringent taste and so on.
Japanese cuisine value the sense of season. Expression of the season is expressed by how the ingredients be cut and the color of the ingredients themselves.
JIN is a perfect tableware that entertains by looking and eating Japanese food.

Why is silverware preferred in the first place?

Silverware has been loved mainly by nobility since a long time ago in Western culture.
As the reasons for that;
・Bactericidal action
・Keep the taste of cooking
・Detect poison
・Elegant and soft luster
・Precious metal
However, silver also has weak points. Silver sulfide is formed by moisture and sulfur in the atmosphere and silver tarnishes and it turns brown or black. For example, discoloration may occur when food containing a lot of sulfur such as mayonnaise and eggs sticks for a long time or it is exposed to a dirty air such as exhaust of gas range for a long time. This discoloration may be a weak point.

What is hand-hammered copperware?

Hand-hammered copperware refers to all items such as kettles and cups that made from a flat plate of copper material with a hammer.
Origin is the Meiwa era (1764 – 1771).
It is a developed hammering technique that was handed down to this place by a craftsman called Tōshichi, and it has been inherited over 200 years.
The process of hand-hammered copperware is as follows.

Cutting – Cut out the copper plate.
Hammering – Make a shape with a hammer step by step. Work hardening of copper by hammering.
Annealing – Soften the work-hardened copper material into fire. Repeat hammering and annealing. ( More than 20 times until completion)
Molding – Repeat hammering and annealing to arrange the whole shape.
Polishing – Make hammered pattern clear.
Patination – Boil in a mixture of verdigris and cupric sulfate.
Vine wrapped – Polish with insects wax, vine wrapped and it is completed.

· Copper plate is mainly used for the material and thick silver plating has been processed.
· The thickness of silver plating is about twice of the general thickness.
· This thickness can withstand use for a long time.
· There is a taste that not made by machine since all products are made by hand.
· It won’t break like ceramics or glassware. · It is repairable even if it gets a dent or the silver plating comes off.

Please pick up and take a look JIN Japanese silverware and experience the unique splendor of this work. And please enjoy the act of meal more honestly. 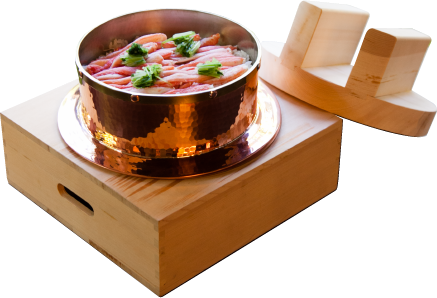